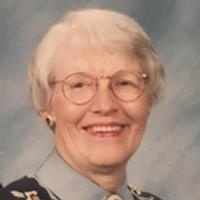 Evelyn was born September 20, 1924 in Chamois, MO to the late Arthur and Lydia (Lieneke) Paulsmeyer.

On August 4, 1948, Evelyn was united in marriage to Donald A. Townley of Chamois, MO and they were married for 63 years. Donald preceded Evelyn in death in 2011.

Evelyn was a graduate of Chamois High School in 1942, received her Bachelor's Degree in Education from the University of Missouri in 1947, and her Master's Degree in Elementary Education from Central Missouri State in 1969. She taught kindergarten and first grade in the Liberty Public School System from 1961 until she retired in 1984.

Evelyn was a long-time member of the First Presbyterian Church of Liberty, Delta Kappa Gamma, and AAUW.

Evelyn is survived by one son Alan Townley and his wife Teri of Overland Park, KS; one daughter Ann Mehr and her husband David of Columbia, MO, four grandchildren, Ryan, Arax, Ava and Zane, and one great-granddaughter, Olivia. She was preceded in death by her brother, Arthur Paulsmeyer, Jr.

To order memorial trees or send flowers to the family in memory of Evelyn Olinda Townley, please visit our flower store.