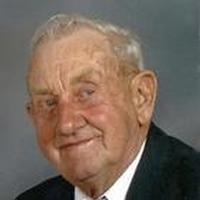 Felix was born December 17, 1927, in Rich Fountain, a son to the late William and Caroline Lena (Rudroff) Boehm.

On October 1, 1949, Felix was united in marriage to Viola Schneider in Westphalia. She survives of the home.

Felix was a lifelong Angus livestock and hay farmer in Rich Fountain. He was a member of Sacred Heart Catholic Church and Knights of Columbus.

Felix lived to farm and enjoyed trotline fishing, cutting wood, his John Deere Tractors, raising Angus cattle, gardening, putting up hay, maintaining the grass at Sacred Heart Parish Cemetery, and "picking out" walnuts and pecans. However his greatest love was spending time with his children, grandchildren and great grandchildren.

In addition to his parents, Felix was preceded in death by: one step brother, Herb Grellner; a step sister, Florence Luebbert; and one granddaughter, Megan Boehm.

Mass of Christian Burial will be held at 11:00 a.m. on Friday, January 27, 2012, at Sacred Heart Catholic Church with Fr. Philip Niekamp as the Celebrant. Interment will follow in the Sacred Heart Parish Cemetery.

Expressions of sympathy may be made to Sacred Heart Catholic School or Megan Boehm Scholarship Fund.

To order memorial trees or send flowers to the family in memory of Felix L. Boehm, please visit our flower store.