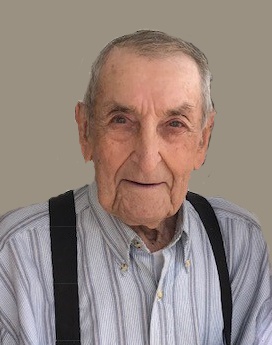 Francis was born May 11, 1925, in Frankenstein, a son to the late Paul and Mary (Samson) Dudenhoeffer.

On Thanksgiving Day, November 24, 1949, he was united in marriage to Martha Mae Bonnot.  She preceded him in death on September 5, 2008.  They were married 59 years and raised eleven children.

Francis was a member of St. George Catholic Church in Linn, Knights of Columbus, and a United States Army Veteran as well as a member of VFW Post #4756 in Linn.

Francis was a farmer most of his life. He loved fishing, playing Preference, and visiting.  In his later years, he was a master at putting together puzzles!  He was also well known for his sausage making ability. Francis’ greatest love was his family.

In addition to his parents and spouse, Francis was preceded in death by: three brothers, Bernard, Alfons and George; a brother-in-law, Lester Boillot; a son-in-law, Paul Parkhurst; two daughters-in-law, Judy and Diane; and two granddaughters.

Interment with full Military Honors will follow in the St. George Parish Cemetery.

Expressions of sympathy may be made to VFW Post #4756 or to a charity of the donor’s choice.

To order memorial trees or send flowers to the family in memory of Francis L. Dudenhoeffer, Sr, please visit our flower store.