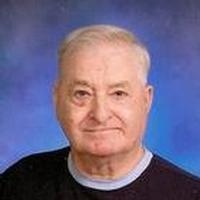 Buck was born on October 9, 1932 in Kansas City, MO, a son to the late Floyd G. and Mary Elizabeth (Schaefer) Frank.

Buck attended school at Rich Hill and joined the Marine Corp serving during the Korean conflict.

Buck worked many years as a carpenter. He was a member of St George Catholic Church, a member of the Knights of Columbus, American Legion Post # 317, and Carpenters Local 945.

He enjoyed reading, hunting and fishing, collecting coins, gardening, eating and sharing candy, and telling tall tales. He was also a history buff and enjoyed spending time with his grandchildren.

Buck is survived by: four sons, John and his wife Cindy Frank of Jefferson City, Charles and his wife Janice Frank of Linn, Ronald Frank of Linn, and Robert and his wife Jennifer Frank of Vienna; three daughters, Mary Stieferman and her husband Eddie of Mokane, Margaret Turpin and her husband Craig of Linn and Jean Shoults of Loose Creek; five brothers, Floyd Frank, Fredrick Frank, Forrest Frank, Felix Frank and Fredolin Frank all of Linn; two sisters, Connie Haslag and Marieta Hentges both of Loose Creek; 17 grandchildren, 5 great grandchildren, as well as many nieces, nephews and friends.

In addition to his wife and parents, Buck was preceded in death by: one brother, Ferdinand Frank, one son-in-law, Lester "Gene" Shoults, and one daughter-in-law, Nancy Frank.

Mass of Christian Burial will be at 10:00 a.m. Saturday, April 2, 2011, at St. George Catholic Church with Fr. I.C. Medina as the celebrant. Interment will follow at Immaculate Conception Parish Cemetery in Loose Creek with full military honors.

Expressions of sympathy may be made payable to a charity of the donor's choice.

To order memorial trees or send flowers to the family in memory of Francis J. Frank, please visit our flower store.