Bill was born July 7, 1943, in Jefferson City, a son to the late Elmer and Anna (Oberkrom) Wissmann.

Bill was a 1961 graduate of Linn High School.

After high school, Bill went to work for Bill’s Standard Service Station in Mt. Sterling where he worked until joining the United States Army in 1965.

After returning home, Bill attended Linn Technical College where he received his degree in Drafting. Bill was employed at the Ameren Power Plant in Fulton and Canam Steel in Washington before taking a job with the Missouri Department of Natural Resources in Rolla as a surveyor.  He retired in 2002.

He was a member of the Linn Masonic Lodge #326, A.F. & A.M. where he received his 50-year membership pin and also a member the American Legion in Bay.

In addition to his parents, he was preceded in death by one brother, George Wissmann, a brother-in-law, Wendell Schneider and one great niece, Baylor Schneider.

In lieu of flowers, expressions of sympathy may be made to Owensville Volunteer Fire Department Station Number 2 in Mt. Sterling.

To plant memorial trees or send flowers to the family in memory of Frederick "Bill" Wissmann, please visit our flower store.

Im wondering if we are related. My dads name was also William Wissmann and had a brother George. They were raised in San Antonio Texas but we have a lot of Wissmanns in Cincinnati OH.
joyjoni1@att.net


Our Friend Bill Wissmann, will be gone for awhile
We will miss that hearty laugh and big Missouri Smile
He was in Commo and drove jeep for Capt. Molix & Lt. Purcell
I know he's in Heaven, that's all I can tell...

Some People Come, Some People Go
Some you never, get to know
But we all knew Bill Wissmann, very well
In the Army, In Korea, He spent his time in Hell!!!

I worked with Bill in the early 1990's, at a fairly boring job. Bill would get a cup of coffee in the morning, set down at his desk next to mine, and look at his watch and say "Better than 7 hours 58 minutes, and 32 seconds.". He and I never did get a lot of work done, as Bill was a great story teller, and had a pleasant voice. Over the years, when work would get dull, I'd remember Bill, and his "time keeping". Until we meet, again, Bill, I'll look forward to you saying "Here in heaven, Its better than Eternity, less two seconds."

I served in Korea in the same unit as Bill. I was there at a different time than him, but heard lots of good words about him. We had many things in common. He served his country well and did what he had to do. HQs 476 Artillery. This is from South Georgia and had to remember him. Rest in peace Bill.

To a good friend and customer, you'll be missed

Peggy and I were saddened to hear of BIll's death: Sending our sympathies to Kaye and rest of the family. Bill was a great friend and fine neighbor.

The men that you served with you in HQs Battery, the 4th Battalion, 76th Field Artillery, 7th Infantry Division render you a slow and deliberate Salute.

Sending our prayers and condolences to the Wissmann family. He will be truly missed. The Rufi family

Friends and Family uploaded 1 to the gallery. 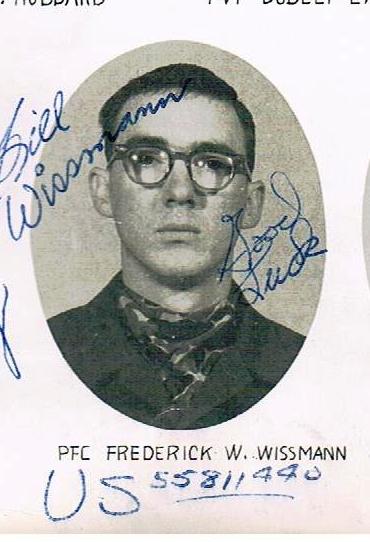