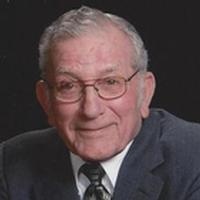 George J. Dudenhoeffer, age 88 of Frankenstein, passed away on Thursday, July 23, 2015, at Linn Living and Rehab Center in Linn.

George was born on April 4, 1927, in Frankenstein, a son to the late Paul and Mary (Samson) Dudenhoeffer.

George attended school in Frankenstein and was drafted in to the United States Army during his junior year of high school. He served as an MP in Germany.

On May 29, 1948, he was united in marriage to Generose Gentges at Our Lady Help of Christians Catholic Church in Frankenstein. She survives at the home.

George worked for American Bakeries in St. Louis as a mechanic/garage foreman for 24 years before moving back to Frankenstein to farm.

George was a member of Our Lady Help of Christians Catholic Church and along with his six brothers, was a charter member of the Linn Knights of Columbus Council #4838. He was also a member of Linn VFW Post #4756.

He enjoyed rock and coin collecting, playing preference tournaments, and playing the card game Hand and Foot with his grandchildren. George was a storyteller and loved spending time with his family.

In addition to his parents, George was preceded in death by: two brothers, Alphonse and Bernard Dudenhoeffer; three sister-in-laws, Loretta, Martha and Rose Dudenhoeffer; a brother-in-law, Lester Boillot.

Expressions of sympathy may be made to Our Lady Help of Catholic Church or SSM Hospice.

To order memorial trees or send flowers to the family in memory of George J. Dudenhoeffer, please visit our flower store.
Send a Sympathy Card