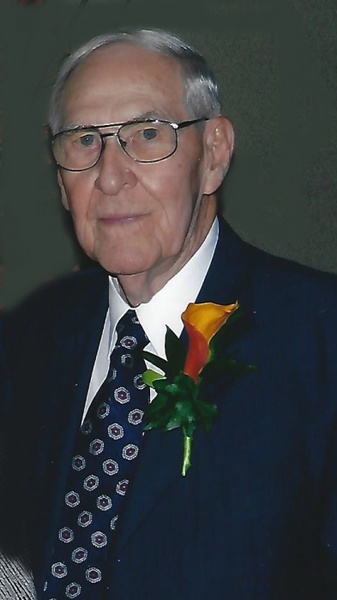 George Edward Wolfe, 90, of Columbia passed away on January 26, 2018 at Boone Hospital Center in Columbia.

George was born in St.Louis and moved to Linn at the age of 7. He graduated from Linn High school in 1945 and immediately entered the United States Army where he served for 18 months in the country of Korea. After being discharged from the military, he attended the University of Missouri where he graduated in 1951 with a degree in accounting.

On May 1, 1948 he entered into marriage with Betty Jean Boes at the St. George Catholic Church in Linn Mo.  She proceeded him in death on June 8, 1958, leaving him with 3 small children. George married Lola Hartman Dessieux in 1959. She had two children at the time of marriage and together they raised their five children as a family. George and Lola were married for 18 years and she proceeded him in death on September 5, 1992.

George worked for the United States Post Office for over 40 years and was Post Master in both Linn and Belle Missouri. He served as mayor of Linn, Missouri in 1958, was a member of the Masonic Lodge in Linn, and was instrumental in the start of the Linn Country Club. He has been involved in many church and community organizations throughout the years and his great interests were his family, studying genealogy and telling stories.

In George’s later years, he moved to Columbia Missouri and married Mary Hughes Kite in 1980.  She had two children when they married and she proceeded him in death in 2007.

In lieu of flowers, the family suggests contributions to Grandview Baptist Church or The Food Bank for Central and Northeast Missouri.

To order memorial trees or send flowers to the family in memory of George E. Wolfe, please visit our flower store.