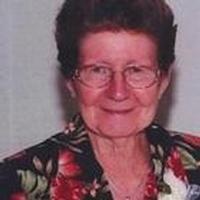 Geraldine L. "Gerry" Linhardt, age 86 of Linn, passed away Friday, May 30, 2014, at St. Joseph's Bluffs in Jefferson City surrounded by her family.

Gerry was born June 25, 1927, in Urichsville, OH, a daughter to the late Edward and Clara (Hilfiker) Baclesse.

Gerry was a 1945 graduate of Linn High School.

Gerry was employed as a bookkeeper at Knollmeyer Motors in Linn, at Traders Oil, Mid America Petroleum in Loose Creek and Linn, and Mosby Distribution in Linn.

Gerry was an active member of the Pilgrim Lutheran Church in Freedom assisting with Vacation Bible School, preparing meals and helping in any way that was needed, Ladies Auxiliary VFW Post #4756, Linn Lions Club, and she volunteered assembling brail books for the blind that were distributed all over the world.

Gerry enjoyed fishing and camping, but most of all, she enjoyed spending time with family and friends.

Gerry is survived by: her sister-in-law and care giver, Joan Baclesse of Linn; two sister-in-laws, Grace Crowe of Linn and Edith Jackson of Liberty, MO; along with several nieces and nephews.

In addition to her parents and spouse of 59 years, she was preceded in death by four brothers, Steele, Lundy, Dale "Buster" and Artie Baclesse; and a niece, Cheryl Baclesse.

Expressions of sympathy may be made to the Pilgrim Lutheran Church Cemetery Fund or to a charity of the donor's choice.

To order memorial trees or send flowers to the family in memory of Geraldine L. Linhardt, please visit our flower store.