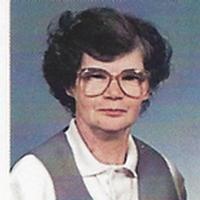 Gertie was born on January 25, 1934, in Frankenstein, a daughter to the late Paul H. and Martina J. (Haslag) Gentges.

Gertie attended the Cadet Creek School and Immaculate Conception School in Loose Creek. She was a lifelong area resident.

Gertie was a member of the Immaculate Conception Catholic Church at Loose Creek.

In addition to her parents, she was preceded in death by: three brothers, Martin, Philip and Henry Gentges; a sister, Bernadine Voss; a sister-in-law, Mary Ann Gentges; two brother-in-laws, Ralph Renterghem and Louis Voss.

Expressions of sympathy may be made to the Immaculate Conception Catholic School or Church.

To order memorial trees or send flowers to the family in memory of Gertrude M. Gentges, please visit our flower store.