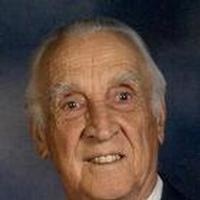 Gilbert was born on July 27, 1919, in Westphalia, a son to the late Gerhardt and Gertrude (Lubbert) Hilkemeyer.

He was a graduate of Westphalia High School and was a World War II and Korean War Army Veteran.

Gilbert was employed as the manager at Three Rivers Electric in Linn for 50 years until his retirement in 1990.

He was a member of Immaculate Conception Catholic Church in Loose Creek and a member of the 4th Degree Knights of Columbus. Gilbert enjoyed gardening and woodworking.

In addition to his wife and parents, Gilbert was preceded in death by: one son, Joe Hilkemeyer, four brothers and two sisters.

Expressions of sympathy may be made to the Immaculate Conception School.

To order memorial trees or send flowers to the family in memory of Gilbert G. Hilkemeyer, please visit our flower store.