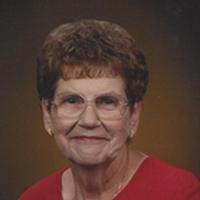 Goldie Ida Hollandworth, age 86, of Republic formerly of Pershing, passed away on Saturday, December 5, 2015, at Mercy Hospital in Springfield.

Goldie was born on April 8, 1929, in Pershing, a daughter to the late Louis and Dora (Whertwine) Lange.

On March 24, 1946, Goldie was united in marriage to George Hollandworth, in Pershing. George preceded her in death on December 5, 1994.

Goldie worked for a number of years at the U-Save Grocery Store in Linn and Scholastic in Jefferson City. Goldie and her husband George, owned and operated G & L Auto Service in Linn for several years.

In addition to her parents and husband of forty eight years, Goldie was preceded in death by a sister, Elsie Malan and a brother, Milton Lange.

Memorial Service will be held at 11:00 a.m. on Saturday, December 12, 2015, at Zion-St. Peters United Church of Christ in Pershing with the Rev. Ron Stair officiating. Inurnment will follow in the Pershing Cemetery.

Expressions of sympathy may be made to Zion-St. Peters United Church of Christ in Pershing.

To order memorial trees or send flowers to the family in memory of Goldie Ida Hollandworth, please visit our flower store.