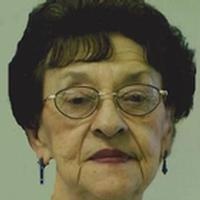 Grace was born August 29, 1932, in Stonyhill, Missouri, a daughter to the late Fred and Ester (Schulte) Engelbrecht.

Grace worked for a number of years at McGraw Edison in Jefferson City. She later worked as a home health worker and at the Linn Post Office.

Grace was a member of St. John's United Methodist Church in Linn and the Osage County Trail Riders.

In addition to her parents and her first husband, she was preceded in death by one daughter, Cheryl Baclesse and one stepdaughter, Darla Maxey.

Funeral Services will be held at 10:00 a.m. on Friday, May 1, 2015, at Morton Chapel with Rev. Floyd Gudde officiating. Interment will follow in the Mint Hill Cemetery.

Expressions of sympathy may be made to the Mint Hill Cemetery or the American Cancer Society.

To order memorial trees or send flowers to the family in memory of Grace M. Crowe, please visit our flower store.