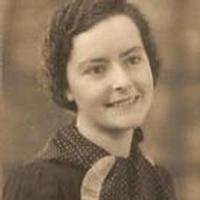 She was born near Linn on February 28, 1913, a daughter to the late George and Jennie (LeFevre) Bacon. In 1956 Grace married Buell Ferrier who preceded her in death in 1962.

After Grace graduated from Belle High School in 1931, she began a teaching career that spanned 43 years. At age 19 she began at Horseshoe Bend, a one-room rural school in Osage County. For two decades she taught in rural schools (Owensville, McDaniel, Bland, Old Woollam and Winfield) as she earned her teaching degree from Central Missouri State Teachers College. During the years of her marriage to her loving husband, Buell, she taught English at Linn High School. After he died she taught one year at Westphalia and then returned to Kirkwood, MO where she had taught before she was married. In the rural schools she taught all subjects, grades 1-8; in the city schools she taught English and social studies. She retired from teaching in Kirkwood in 1974.

Her retirement allowed her to return to the Bacon Family Farm in rural Osage County. Grace first lived on the farm when her parents and siblings moved there on her 7th birthday in 1920. She always considered the farm her permanent home and refuge for the remaining 27 years of her life.

Settled on the farm, she began to write stories of her life. These were detailed, humorous tales of real people and events in central Missouri over 70 years. She penned (hand-written on yellow. legal sheets) two published books of memoirs: "Teacher, Teacher, I Done It" in 1986 and "Post Oak Sprouts "in 2001. The earlier book was awarded First Place for Best Nonfiction by the Society of Midland Authors in 1987. To receive the honor she went to Chicago and attended the awards ceremony which was held at the Drake Hotel. While there she was interviewed live on WGN radio. After she returned home Grace was asked to numerous speaking events and book signings. The events were not nearly as important to her as reconnecting with the people she had befriended over the years. Many of them visited her on the farm to her great pleasure. "Come any time," was her sincere good-bye to her many friends and family.

In addition to her husband and parents, Grace was preceded in death by: her older sister, Mae Bacon Leach; three younger brothers, George, Ellis, and Charles Bacon; and one niece Kimberly Bacon.

Expressions of sympathy may be made to the Osage County Historical Society or to St. John's United Methodist Church and left in care of Morton Chapel, Linn.

To order memorial trees or send flowers to the family in memory of Grace V. Bacon Ferrier, please visit our flower store.