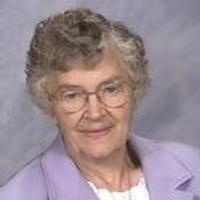 Grace Mary Jansen, age 81, of Bonnots Mill, passed into heaven on January 21, 2014, at University of Missouri Medical Center in Columbia surrounded by her family.

She was born September 8, 1932, in Loose Creek, a daughter of the late Herbert and Gertrude (Muenks) Porting.

On April 28, 1954, she was united in marriage to Albert A. Jansen at Immaculate Conception Catholic Church in Loose Creek. He survives at the home.

Grace was a 1950 graduate of Loose Creek High School. She worked at the Department of Social Services for the State of Missouri until she and Albert started their family in Bonnots Mill. They are members of St. Louis of France Catholic Church Bonnots Mill.

Grace was preceded in death by: her oldest son, Michael Jansen; a brother and sister in law, Arthur and Catherine (Rotter) Porting, and her brother in law, Bill Roling.

In lieu of flowers, expressions of sympathy may be made to Immaculate Conception Catholic School in Loose Creek.

To order memorial trees or send flowers to the family in memory of Grace M. Jansen, please visit our flower store.