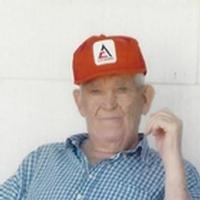 Harry was born August 7, 1924 in Loose Creek, a son to the late Jacob and Anna (Schmitz) Scheulen.

On November 8, 1947, Harry was united in marriage to Marie Theresa Holtschneider in Rich Fountain. She survives of the home.

Harry was a member of Sacred Heart Catholic Church, past member of the Knight of Columbus, and a member of American Legion Post #317 in Freeburg.

Harry was a simple man. He enjoyed farming, hunting, playing cards especially preference and pinochle, and spending time with his family.

Mass of Christian Burial will be held at 11:00 a.m. on Tuesday, October 4, 2016, at Sacred Heart Catholic Church with Fr. William Debo as the Celebrant. Interment will follow in the Sacred Heart Parish Cemetery with full Military Honors.

Expressions of sympathy may be made to Sacred Heart Catholic Church, 4277 Highway U, Rich Fountain, MO 65035.

To order memorial trees or send flowers to the family in memory of Harold "Harry" A. Scheulen, please visit our flower store.