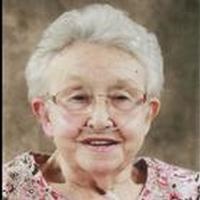 Helen was born September 7, 1934, in Jefferson City, a daughter to the late August and Johanna (Luebbert) Kliethermes.

Helen was a 1952 graduate of Fatima High School.

On August 29, 1953, she was united in marriage to Herbert B. Kempker at Immaculate Conception Catholic Church in Loose Creek. He preceded her in death on March 14, 1997.

Helen was employed as a clerk at the TG & Y Store in Jefferson City, worked at the Linn Manufacturing Pants Factory in Linn, was a cook at Country Kitchen which was located at the junction in Loose Creek, but her greatest joy was babysitting which she did for over 20 years.

Helen was a member of Immaculate Conception Catholic Church in Loose Creek, St. Ann's Sodality, Sewing Circle, Prayer Chain, and a member of the Senior Citizens' Club where she served as President and Vice-President. Helen was a very religious lady who had a devotion to the Blessed Virgin Mary.

Helen enjoyed quilting, embroidering, dancing, playing cards especially Rummy and Pinochle, loved taking care of her house, gardening, canning and cutting the grass. She liked going out to eat, taking day trips, going to church picnics, but most of all, she loved spending time with her family.

In addition to her parents and spouse, she was preceded in death by: three brothers, August Kliethermes, Jr., Ralph Kliethermes, and Richard Kliethermes and one sister, Mary Louise Catherine Bock.

Expressions of sympathy may be made to St. Ann's Sodality or the Sewing Circle.

To order memorial trees or send flowers to the family in memory of Helen J. Kempker, please visit our flower store.