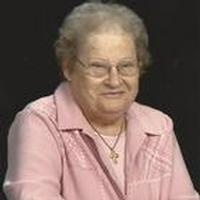 Helena was a homemaker and a lifelong area resident. She was a member of Sacred Heart Catholic Church in Rich Fountain, Ladies Sodality and the Sewing Circle. She also was a cook for Sacred Heart School and was active in helping with the church picnics and other fund raisers.

She enjoyed sewing, quilting, gardening, and spending time with her family and especially her grandchildren.

Mass of Christian Burial will be held at 11:00 a.m. on Wednesday, April 18, 2012, at Sacred Heart Catholic Church with Fr. Philip Niekamp as the celebrant. Interment will follow in the Sacred Heart Parish Cemetery.

Expressions of sympathy may be made to Sacred Heart Church or School.

To order memorial trees or send flowers to the family in memory of Helena H. Lehmen, please visit our flower store.