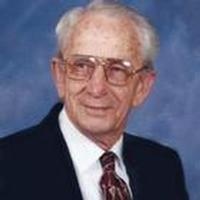 Herb was born June 1, 1920, in Linn, a son to the late Robert Lee and Margaret Ann (Schmitz) Bledsue-Groves.

Herb was a 1939 graduate of Linn High School and served in the US Army during World War II where he earned two Bronze Stars.

Herb owned and operated the Skelly service station in Linn for over 30 years.

He was an avid fisherman and enjoyed gardening, the St. Louis Cardinals, attending Linn High School athletic events and spending time on the Gasconade River with his family.

Herb is survived by: two daughters, Lorraine and her husband Tom Masso of Linn, Margaret "Peggy" and her husband Donald Kasten of Columbus, OH; one step-brother, Glenn and his wife Burnus Groves of Springfield; three grandchildren, Sarah Kasten and her husband Nicholas Pearson, Lisa Masso and her husband Robert Walker and Emily Masso; one great grandson, Alexander Pearson and a sister-in-law, Anna Bledsue of Jefferson City.

In addition to his wife and parents, Herb was preceded in death by his step-father, William Groves; one brother William "Bill" Bledsue; an infant grandson, Christopher Masso; one brother-in-law, Leonard Davis and one sister-in-law LaDella Rogers

Expressions of sympathy may be made to St John's United Methodist Church or to SSM Hospice.

To order memorial trees or send flowers to the family in memory of Herbert Clark Bledsue, please visit our flower store.