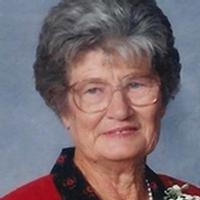 Hilda was born on August 15, 1920, in Linn, a daughter to the late Paul and Martha (Griechen) Bossaller.

Hilda attended the Wildcat school in Osage County until the eighth grade and then moved to St. Louis to be a nanny. Before her marriage she was a nanny to a prominent family in Jefferson City, MO.

Hilda was a member of Oklahoma Church of Christ and the Osage County Historical Society.

Hilda enjoyed crocheting, sewing, gardening, fishing, and growing flowers. She was loved by many, touched the lives of many, will be missed dearly, and will never be forgotten. She was a loving, kind, and patient mother to her children and a loving spouse to her husband, Noel.

For many years Hilda and Noel enjoyed spending winters in South Texas and other southern states. They enjoyed traveling through most of the United States and seeing historical sites.

Hilda is survived by: two sons, Waymon Baker and his wife Pat of Jefferson City, and Michael Baker and his wife Brenda of Warsaw; one daughter, Barbara Crader and her husband Richard of Jefferson City; nine grandchildren, 24 great grandchildren; three sisters, Marie Clemons of St. Louis, Eleanor Rich of Cedar Rapids, IA, and Verla Fritz and her husband Richard of Lake St. Louis; a sister-in-law, Irene Bossaller of St. Louis and numerous nieces and nephews.

In addition to her parents and spouse of 74 years, Hilda is preceded in death by: four brothers, Herbert, Earl, Walter and Donald Bossaller; and two sisters, Lorene Sandhaus and Annie Chisholm.

A luncheon will start at 1:00 p.m. at the Oklahoma Church of Christ for family and friends to gather and share some memories of Hilda.

In lieu of flowers, expressions of sympathy may be made to Oklahoma Church of Christ.

To order memorial trees or send flowers to the family in memory of Hilda M. Baker, please visit our flower store.