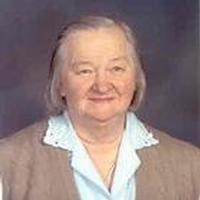 Ida was born January 25, 1925, in Meta, a daughter to the late Liborious and Margaret (Bax) Hagenhoff.

Ida started as a beautician in 1944 in Meta and worked for about 25 years. Then in 1960 she and her husband opened Massman Florist and Greenhouse in Meta and operated it for the next 35 years.

Ida was a member of St. Cecilia Catholic Church in Meta where she sang in the choir and was a member of St Ann's Sodality. Ida was also a member of the Blue Army and Rosary Makers whose members were devoted to making rosary's that were then sent to third world countries.

She enjoyed gardening and spending time with her family.

In addition to her husband and parents, Ida was preceded in death by: one son, Gil Massman; 8 brothers, Ben, Adolph, Leo, Joe, Paul, Ray, Fred and Frank Hagenhoff; and a great grandson, Alex Massman.

To order memorial trees or send flowers to the family in memory of Ida J. Massman, please visit our flower store.