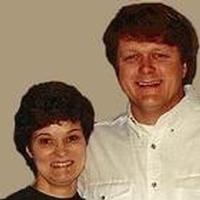 Bo was born October 2, 1962, in Jefferson City, a son to the late Harvey Joe Pinet and Ruth Evelyn (Weaver) Pinet who survives of Holts Summit.

Jackie was born August 22, 1953, in Jefferson City, a daughter to the late Jack Durham, Jr. and Mary Lou (Morland) Durham who survives of Jefferson City.

Bo and Jackie both attended school in Jefferson City.

Bo had been employed as a police officer in Cedar City and later worked for the Osage County Sheriff's Department as a Deputy. He owned and operated Summit Garage Door Company in Holts Summit and was an over the road truck driver for Quality Transport for several years.

Jackie was previously employed by the State of Missouri and for the last several years had worked for the Jefferson City School District.

Bo enjoyed hunting, and he and Jackie loved their fishing trips together and spending time with their family.

Funeral Services will follow at 12:00 pm, with interment in the Fairview Cemetery.

To order memorial trees or send flowers to the family in memory of Jackie Lee Pinet, please visit our flower store.
Send a Sympathy Card