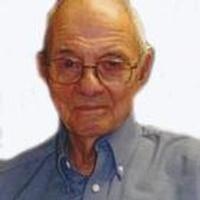 Jim was a graduate of Linn High School. Jim was a US Army veteran, serving in the Pacific theater during the final months of World War II. He later was stationed in Korea.

On September 25, 1948, Jim was united in marriage to Margaret Ann Voss in Linn. She survives of the home.

Jim worked several years in car sales and was of the Christian faith. He was a member of Linn Masonic Lodge #326 A. F. & A. M.

He enjoyed the outdoors including hunting, fishing, and spending time with his family. A big part of Jim's family included his border collie, "Bo" and his cat, "Kitty".

In addition to his wife, Jim is survived by: two daughters, Judy Mantle of San Diego, CA. and Elaine and her husband Larry Johns of Beaufort; one brother, Don and his wife Clara Mantle of Peoria, AZ; four grandchildren, Johnnie and Jimmy McCabe and Eugene "Gene" and Tim Mantle; eight great grandchildren as well as many nieces, nephews and friends.

Expressions of sympathy may be made to the American Stroke Foundation.

To order memorial trees or send flowers to the family in memory of James David Mantle, please visit our flower store.