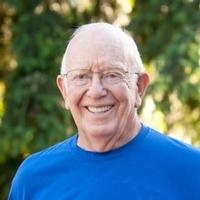 He was born June 8, 1935, in Cadet Creek, MO (near Loose Creek), the oldest son of Norbert and Hildegard (Porting) Muenks.

A 1953 graduate of Fatima High School, Westphalia, MO, he then served in the 59th Field Artillery Battalion, US Army, from 1955-1958, stationed in Germany. After his military service, he worked at the Muenks Feed Mill in Loose Creek. In 1962, he moved to Washington State and worked for Arden Dairy (17 years) in Seattle, and Auto Warehousing in Tacoma until retirement in 1997. On June 15, 1968, he married Mary Ann Panesko from Chehalis, WA.

He was an active member of American Legion Post 67 in Puyallup, WA. He also built tracks and coached BMX bicycle racing for many years. He made multiple trips to Germany, tracing genealogy. He loved to fish, including trips to Montana and Canada. His speciality was Washington salmon, which he loved to catch, smoke, and share with friends.

Visitation will be held from 10:00 a.m. until 11:30 a.m. on Saturday, September 30, 2017, at Morton Chapel in Linn. A Prayer Service will follow at 11:30 a.m. conducted by Fr. Daniel Merz. Interment will be in the Immaculate Conception Parish Cemetery in Loose Creek.

In lieu of flowers, donations may be made to the Osage County Historical Society in Linn.

Condolences may be shared with the family at www.mortonchapel.com.

To order memorial trees or send flowers to the family in memory of James William Muenks, please visit our flower store.