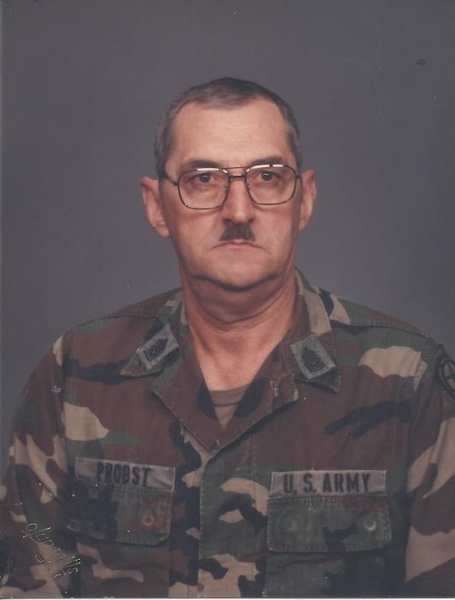 Jim was born June 30, 1934, a son to the late Elmer and Catherine (Haney) Probst in Handy, MO, located in rural Ripley County.

Following graduation from high school in Fremont, MO, Jim enlisted in the US Army in 1953, and was deployed to Korea where he served as a Military Policeman during the war. His military career spanned nearly four decades, culminating in his retirement in 1992, as the Command Sergeant Major of the 135th Signal Battalion, 35th Infantry Division.

Jim was united in marriage to Billie Dean Pence on May 31, 1958. She survives of the home.

In 1984, Jim received ordination as a minister, serving first as a Superintendent of Christian Education for the Church of God in Savannah, MO. Together with Billie, Jim founded and pastored a small church in Maryville, MO. where they also held weekly services for area nursing home residents. Moving to St. Joseph in 1987, Jim pastored the North Church of God before retiring from active ministry in 1993.

Jim followed Billie in her passion as a Red Cross volunteer. In addition to deployments for hurricanes, floods and fires, they deployed to New York following the 9/11 terrorist attacks, spending five weeks near ground zero providing meals to rescue workers.

In addition to his parents, Jim was preceded in death by: three brothers, Elmer Jr, Gene and John Probst; one sister, Peggy Ray and a granddaughter Lili.

Funeral Services will be at 10:00 a.m. on Monday, November 13, 2017 at the Handy Union Church in Handy, MO. With Rev. Jim Davis officiating. Interment will follow in the Handy Cemetery.

Expressions of sympathy may be made to the charity of the donor’s choice.

To order memorial trees or send flowers to the family in memory of James Edwin Probst, please visit our flower store.