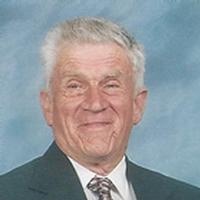 Jerome was born on August 26, 1926, in Jefferson City, a son to the late John and Hilda (Bernskoetter) Cortvrient.

Jerome was a 1944 graduate of Linn High School. He served in the United States Army during World War II.

Jerome was a lifelong farmer and he was employed with MoDot and he retired from Jefferson City Correctional Center in 1991. He enjoyed playing cards, dominos, fishing, and gardening. However, his greatest love was the time spent with his family.

Jerome is survived by: two sisters, Betty Welch and Dorothy Lamb both of Jefferson City, as well as many nieces, nephews and friends.

In addition to his parents, he was preceded in death by: an infant brother, James Cortvrient and two brothers-in-law, Melvin Lamb and Harold Welch.

Visitation will be held from 10:00 a.m. to 11:00 a.m. on Friday, July 1, 2016, at St. George Catholic Church in Linn with a Mass of Christian Burial to follow at 11:00 a.m. with the Rev. William Debo as the celebrant. Interment with Full Military Honors will follow in the St. George Parish Cemetery.

Arrangements are under the direction of Morton Chapel, Linn, Missouri (897-2214). www.mortonchapel.com

To order memorial trees or send flowers to the family in memory of Jerome Bernard Cortvrient, please visit our flower store.