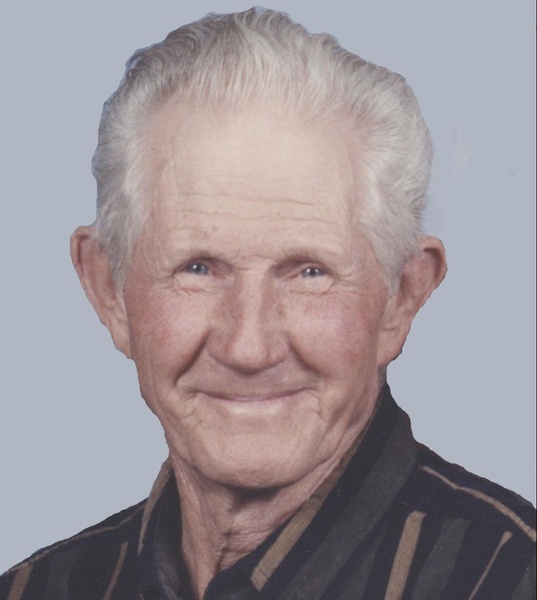 Jerome H. Haslag, age 98, of Loose Creek, passed away peacefully surrounded by his loving family on Friday, May 13, 2022, at Jefferson City Manor in Jefferson City.

Jerome was born on December 16, 1923, on the family farm in Loose Creek, a son to the late Conrad and Gertrude (Orscheln) Haslag.

Jerome was a graduate of Immaculate Conception High School in Loose Creek.  After high school, he worked for Gerard Muenks doing farm work.  He served his country in the United States Army during World War II from August 14, 1944, to July 2, 1946.  He served in the 79th Infantry Division. Before returning home after the war, he served with headquarters company, second battalion, 26th infantry regiment, first division for ten months as a supply clerk.  Following that he worked in the German prison of war camp near Nurnberg, Germany.

After getting home, he worked various jobs for farmers in the area.  He then went to Veteran School under the GI Bill for 3 years.  He then worked for Martin, Lawrence, Sylvester, and Herbie Backes in poultry plants as well as working his farm.  He later worked at Algoa Prison as a guard.  He farmed his land until 1999.

On August 27, 1953, Jerome was united in marriage to Johanna “Janet” Schaefer at St. George Catholic Church in Linn.  Janet preceded him in death on December 15, 2016.

Jerome was a member of Immaculate Conception Catholic Church in Loose Creek where he was active with the parish council.  He was also a member of the Linn VFW Post 4756.

Jerome enjoyed gardening, and delivering all his vegetables to family, friends, and neighbors. He also enjoyed bowling, hunting, fishing, and playing Pitch and Preference.

In addition to his parents and spouse of 63 years, Jerome, was preceded in death by a grandson, Brad Curry; a son-in-law, Mike Curry, a brother, Hugo Haslag and two sisters-in-law, Genrose and Theresa Haslag.

Expressions of sympathy may be made to Immaculate Conception Catholic Church in Loose Creek or to the charity of the donor’s choice.

To order memorial trees or send flowers to the family in memory of Jerome H. Haslag, please visit our flower store.