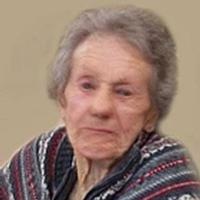 Jewell was born October 2, 1917, in Deer, a daughter to the late Ira and Josephine (Turner) Waters.

Jewell was a graduate of Chamois High School and attended college in Warrensburg.

Jewell worked several jobs over her lifetime including teaching school, working at the shoe and pallet factories in Chamois, a beauty operator in Hermann and St. Louis, Missouri Credit Union League, a 15 year employee for a Pharmaceutical company in St. Louis as well as owning and operating a general merchandise store in Chamois.

Jewell is survived by: one sister, Manilla Boss of Tomball, TX. and one brother, Muriel Waters of Chamois as well as 2 nephews and a niece.

In addition to her parents and spouse of 44 years, Jewell was preceded in death by two sisters, Alice Curtis and Archie Curtit and a nephew, Ron Curtis.

Graveside services will be held at 10:00 a.m. Monday, December 21, 2015, in the Oakland Section of the Chamois City Cemetery in Chamois.

In lieu of flowers expressions of sympathy may be made to a charity of the donor's choice.

To order memorial trees or send flowers to the family in memory of Jewell Marie Weiher, please visit our flower store.