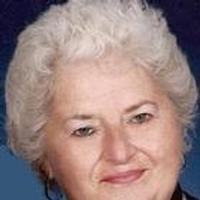 Joan was born August 6, 1939, a daughter to the late Peter Jurd and Marie Anna (Gelven) Huesgen.

Joan retired after 15 years from Chesebrough-Pond's. Joan and Gene owned and operated Vocks Plants in Frankenstein until 2004.

In addition to her husband, Joan is survived by: three sons, Danny and his wife Yvonne Vocks of Linn, Jeff and his wife Jeanette Vocks of Linn, and Mike Vocks of Frankenstein; one daughter, Lynn Byrd and her husband Rex of Linn; seven grandchildren, Christine Byrd, Corey Vocks, Chad Vocks and his wife Jessica, Elizabeth Byrd, Ashley Byrd, Nick Vocks, and Dylan Vocks; two brothers, Jack Huesgen of Frankenstein, and Carl Huesgen of Bridgeton, and many nieces, nephews and friends

In addition to her parents, she was preceded in death by one brother, Ellis J. Huesgen.

Mass of Resurrection will be at 10:00 a.m. on Wednesday, September 21, 2011, at Our Lady Help of Christians Church in Frankenstein with Fr. I.C. Medina as the Celebrant.

In lieu of flowers, expressions of sympathy may be made to the American Cancer Society.

To order memorial trees or send flowers to the family in memory of Joan E. Vocks, please visit our flower store.