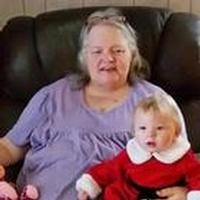 JoAnn Wolfe, age 59 of High Point and formerly of Linn, passed away Monday, January 11, 2016, at SSM Health in Jefferson City after a long illness.

JoAnn was born April 4, 1956, in St. Louis a daughter to the late Earl and Nadine (Roux) Pritchett.

JoAnn attended school in Belle and Bland as a child.

On June 9, 1974, JoAnn was united in marriage to Daniel Wolfe in Belle. He survives of the home.

JoAnn was of the Baptist faith and enjoyed fishing, listening to all kinds of music and spending time with her family.

In addition to her parents, JoAnn was preceded in death by; two brothers, Earl and Nathan Pritchett; one sister, Angie Pirtle and a granddaughter Cresentia Wolfe.

Visitation will be held from 10:00 a.m. until noon on Saturday, January 16, 2016, at Morton Chapel in Linn. Funeral Services will follow at Noon.

Burial will be in the Linn Public Cemetery.

To order memorial trees or send flowers to the family in memory of JoAnn Wolfe, please visit our flower store.