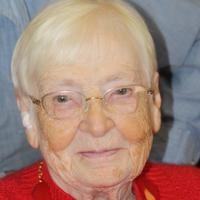 She was born October 23, 1922, in Linn, a daughter to the late Joseph and Elizabeth (Reinkemeyer) Schaefer.

On August 27, 1953, she was united in marriage to Jerome Herman Haslag at St. George Catholic Church in Linn. He survives at the home.

Janet worked at Linn Manufacturing and retired from Missouri Division of Employment Security.

She was a member of Immaculate Conception Catholic Church in Loose Creek.

In addition to her parents, she was preceded in death by one grandson, Brad Curry; five brothers and four sisters.

Expressions of sympathy may be made to the Immaculate Conception Catholic Church or to a charity of the donor’s choice.

To order memorial trees or send flowers to the family in memory of Johanna "Janet" Haslag, please visit our flower store.