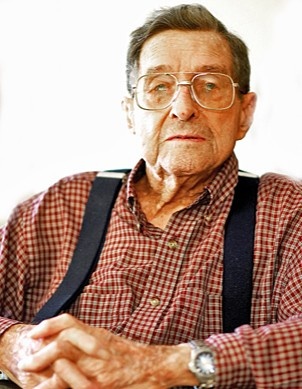 Russell was a 1936 graduate of Linn High School and a 1942 graduate of the University of Missouri where he received his BS in Agriculture.

Russell had been a member of St. John’s United Methodist Church in Linn since 1930 where he served on the Administrative Board as President and Treasurer. He was also a member of the Methodist Men’s Club and served as a District Trustee. Russell was a member of the Linn Masonic Lodge, Linn Public School Board where he had an active part in the establishment of State Technical College of Missouri, Linn Public Cemetery Board, Three Rivers Cooperative Board Member, Treasurer of the Osage County Livestock Association, member of the Rural Fire Protection Board, past member of the Linn Lions Club and served on the Osage County Fair Board. Russell was also involved in teaching farming classes to returning World War II soldiers.

He enjoyed fishing and farming was not only his job, but his passion. His dog, Lady, was his constant companion. Russell was a people person and enjoyed attending school and community functions. He never met a stranger.

In addition to his parents and spouse of 60 years, he was preceded in death by: two brothers and their wives, Robert and Irma Baker and Clarence and Claudia Baker; three sisters and their husbands, Minnie and Arch Mahon, Irene and Harry Ebert, and Faye and Adam Schneider; and a special friend, Edna Starr.

Funeral Services will be held at 2:00 p.m. on Sunday, August 19, 2018, at St. John’s United Methodist Church in Linn with Rev. Bill Barkman officiating.

Interment will be in the Linn Public Cemetery.

Expressions of Sympathy may be made to St. John’s United Methodist Church or Linn Public Cemetery.

To order memorial trees or send flowers to the family in memory of John Russell Baker, please visit our flower store.