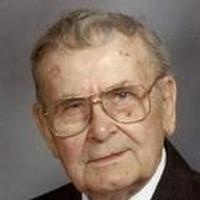 Joe was born March 26, 1911, in Frankenstein, a son to the late Lorenz and Agnes (Nilges) Samson.

Joe attended school in Frankenstein. On October 10, 1940, Joe was united in marriage to Florence A. Jaegers in St. Louis. She preceded him in death on February 13, 2010.

In his younger days, Joe was a member of the Samson Brothers Band and he also operated a movie theatre in Chamois. Joe was a mechanic at the Ford Garage in Linn and a farmer.

Mass of Christian Burial will be at 11:00 a.m. on Wednesday, June 15, 2011, at St. George Church in Linn with Fr. I.C. Medina as the Celebrant. Interment will follow at St. George Cemetery.

Expressions of sympathy may be made to St. George Parish.

To order memorial trees or send flowers to the family in memory of Joseph H. Samson, please visit our flower store.