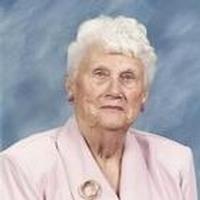 Josepha was born on September 21, 1919, in Linn, a daughter to the late John and Mary (Vasen) Reinkemeyer.

Josepha worked as a dairy farmer for over twenty years, served as Deputy County Collector for eleven years and drove a bus for the Fatima School District for about ten years.

Josepha was a member of Sacred Heart Catholic Church in Rich Fountain, the Sewing Circle and Western Catholic Union. She was an avid reader, enjoyed quilting, sewing, and fishing. Her greatest love was spending time with her grandchildren and great grandchildren.

Mass of Christian Burial will be at 10:00 a.m. on Friday, December 27, 2013, at Sacred Heart Catholic Church in Rich Fountain with Fr. Philip Niekamp as the Celebrant. Interment will follow at the Sacred Heart Parish Cemetery.

Expressions of sympathy may be made to the Sacred Heart School or a charity of the donor's choice.

To order memorial trees or send flowers to the family in memory of Josepha F. Brandt Bock, please visit our flower store.