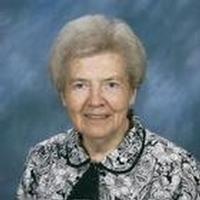 Josephine was born March 19, 1916, in Loose Creek, a daughter to the late Theodore and Josephine (Schuelen) Kremer.

On September 17, 1936, Josephine was united in marriage to Martin L. Backes at Immaculate Conception Catholic Church in Loose Creek. Her husband preceded her in death on March 30, 1971.

Josephine was a member of Immaculate Conception Catholic Church in Loose Creek as well as the St. Ann's Ladies Sodality, the Sewing Circle and the Senior Citizens Group.

In addition to her husband and parents, Josephine was preceded in death by: two brothers, Henry and Pete Kremer; three sisters, Mary and Pauline Rustemeyer and Anna Backes and a son-in-law, Vincent Huhn.

Memorial Donations may be made to the Immaculate Conception Catholic School.

To order memorial trees or send flowers to the family in memory of Josephine C. Backes, please visit our flower store.