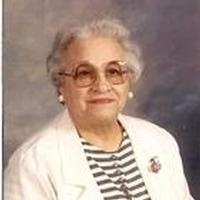 Jaye was born April 20, 1922 in Philadelphia, PA., a daughter to the late Michael and Caroline (Inga) LaCorte.

She was a graduate of the S. Philadelphia High School for Girls and received her B.S Degree from State Teachers College in West Chester, PA.

Before moving to Missouri, Jaye taught school in Bridgeton, NJ. She then went to work for the Osage County R-II School District where she taught from 1947 until her retirement in May of 1984.

Jaye was a member of St. George Catholic Church in Linn, St. Ann's Sodality, the Knights of Columbus Ladies Auxiliary, the Over 50 Club, W.C.U., Missouri State Teachers Association, M.O.G. Retired Teachers Association and the Learning in Retirement of Lincoln University. She also was a member of the Linn Garden Club, Linn Women's Club, the Osage County Historical Society and a charter member of the Ladies Auxiliary of V.F.W Post 4756.

Jaye is survived by: one son; Michael and his wife Maria Bish of Lohman, one daughter; Mary Jo Durkin and her husband Tom of Jefferson City, one brother; Vince and his wife Joan LaCorte of the state of California, 5 grandchildren and 8 great grandchildren.

In addition to her parents and husband, Jaye was preceded in death by one sister; Angela Tedesco.

Mass of Christian Burial will be at 10:00 a.m. Thursday, June 30, 2011 at St. George Catholic Church with Fr. I.C. Medina as the Celebrant. Interment will follow in St. George Cemetery.

Expressions of sympathy may be made to St George School.

To order memorial trees or send flowers to the family in memory of Josephine Bish, please visit our flower store.