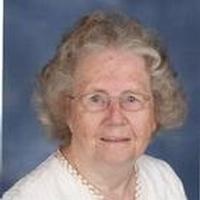 Joyce Darlene Woods, age 82, of Chamois, formerly of Belle, passed away Thursday, March 27, 2014 at her daughter's home in Holts Summit.

Darlene was born January 11, 1932, in Murdo, SD, a daughter to the late Henry Clyde and Lillie Myrtle (Williams) Hampton.

Darlene attended college where she received her teaching certificate in Springfield, SD. She later continued her education at Lincoln University in Jefferson City. She spent her first year of teaching in a one-room schoolhouse in South Dakota.

Darlene was a very real presence in her church and community. During her life she was a wonderful teacher, wife, mother, grandmother and friend. She was an active member of the Linn Family Worship Center and over the years taught Sunday school for many age groups, led Bible study, as well as women's and community ministries. Her relationship with Jesus was her life and her love of people shined through in all she did. She was a part of a wonderful friendship that was affectionately referred to as the "God Squad' and the "Prayer Warriors". Darlene's life was full of hope, joy, and peace, through Jesus Christ.

Darlene enjoyed gardening, sewing, crocheting, painting pictures, sharing her sense of humor and spending time with her family and friends.

In addition to her parents and husband, Darlene was preceded in death by; four brothers, Charles, Everett, Floyd and Clyde Hampton; one sister, Juanita Weber and one great grandson, Trevor Smith.

Visitation will be held from 10:00 a.m. until noon, Monday, March 31, 2014 at the Linn Family Worship Center. Funeral services will follow at noon with Rev. Matt Lee officiating. Interment will be in the Countryside Memorial Gardens Cemetery near Owensville.

Expressions of sympathy may be made to the Linn Family Worship Center.

To order memorial trees or send flowers to the family in memory of Joyce Darlene Woods, please visit our flower store.