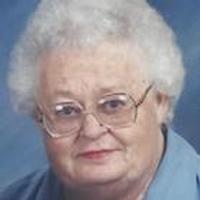 Katie Ellen Herndon, age 79, of Washington and formerly of Linn, joined her beloved husband Shorty in Heaven on Wednesday, September 24, 2014.

Katie was born February 5, 1935, in Linn, a daughter to the late Robert and Gladys (Ridenhour) Branson.

Katie was a 1954 graduate of Linn High School.

Katie had worked as a cook at various schools and restaurants as well as being a housekeeper at Mercy Hospital in Washington but her love was children and she babyset for many families over the years.

Katie was a member of Washington First Christian Church and a former member of Oklahoma Church of Christ. She was also a member of the Order of the Eastern Star.

Katie enjoyed talking on the phone and going to the Senior Center but her greatest love was spending time with her family.

Katie is survived by: two sons, Marvin and Bob Herndon of Washington; one brother, Russell James Branson of Washington; one sister Susie Leasor and her husband Robert of Cherryville; three grandchildren, Jenny, Bill and Joe; two great grandchildren, Johnathan and Nicholas; four brothers-in-law, John Murphy of Owensville, Jim Roberds of Belle, Lane (Sharon) Herndon of Linn and Larry (Linda) Herndon of Mexico as well as many nieces and nephews.

In addition to her parents and spouse of 56 years, Katie was preceded in death by two sisters, Shirley Murphy and Arlena Roberds; one sister-in-law, Betty Branson and her father-in-law and mother-in-law, Arthur and Ruby Herndon.

Graveside services for Katie will be held at 2:00 p.m. Saturday, October 4, 2014 at Oklahoma Church of Christ Cemetery with Minister Dave Smith officiating.

In lieu of flowers expressions of sympathy may be made to the Oklahoma Church of Christ Cemetery Fund c/o Morton Chapel, P.O. Box 77 Linn, MO 65051

To order memorial trees or send flowers to the family in memory of Katie Ellen Herndon, please visit our flower store.