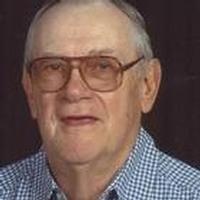 Ken Paschal, age 80 of Linn, passed away Friday, March 28, 2014, at University of Missouri Hospital and Clinics in Columbia.

Ken was a 1951 graduate of Linn High School. He graduated on a Friday night and left the following Monday to play minor league baseball for the Boston Red Sox. Ken played baseball for the Oneonta Red Sox in 1951 and then in 1952, he played for the Rutherford County Owls where he was named the Most Valuable Player.

Ken served in the United States Army during the Korean Conflict.

On October 13, 1956, he was united in marriage to Catherine Ann Kuster at St. George Catholic Church in Linn. She survives of the home.

Ken was employed by the Missouri Highway Department in the Soils and Materials Lab for over 40 years, retiring in 1995. He was a high school basketball referee for over 30 years and in the mid 1960's, he was selected to referee the high school final four basketball games for two consecutive years for Class M Schools in the Brewer Fieldhouse in Columbia. Ken also played baseball for the Linn Tigers Team, in a traveling adult baseball league, and was known for his hitting abilities. He also coached his son's Babe Ruth baseball team in Jefferson City. Ken was an avid sportsman and enjoyed watching the Linn Wildcats, but most of all he loved spending time with his family, especially his grandchildren.

Ken was a member of St. George Catholic Church in Linn and a Charter member of the Osage Trail Riders. He often took week long trail rides in southeastern Missouri. Ken was a "hobby farmer" and always had a horse or two on his farm. He enjoyed being outside either riding his horse, cutting wood, deer or raccoon hunting.

Mass of Christian Burial will be held at 11:00 a.m. on Tuesday, April 1, 2014, at St. George Catholic Church with Fr. John Schmitz as the celebrant. Interment with full military honors will follow in the St. George Parish Cemetery in Linn.

Expressions of sympathy may be made to Linn Athletic Booster Club.

To order memorial trees or send flowers to the family in memory of Ken Paschal, please visit our flower store.