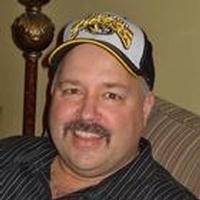 Kenny was born March 31, 1963, in Jefferson City, a son to Roger and Donna (Hayes) Clark who survive in Linn.

Kenny was a 1981 graduate of Linn High School.

Kenny worked as a Bus Salesman for Clark Carpenter Bus Sales, a family business and later as a salesman for Ponder Equipment Company.

Kenny was a member of St. George Catholic Church.

Kenny enjoyed all sports but his favorite teams were the St. Louis Cardinals and Missouri Tigers. He was a very sociable person and especially loved spending time with his children and grandchildren.

In addition to his parents, Kenny is survived by: one son, David Clark and his wife Brandy of Hartsburg; one daughter, Emily Logan and her husband Justin of Ashland; two sisters, Kimberly Battig and her husband Kurt of St. Louis, and Karen Eisterhold and her husband Doug of Rich Fountain; two grandchildren, Mason and Myles Clark; one nephew, Jace Eisterhold and three nieces, Kara Battig, Kate Battig, and Jenna Eisterhold.

Mass of Christian Burial will be held at 10:00 a.m. on Thursday, November 20, 2014 at St. George Catholic Church in Linn. Interment will follow in the Oklahoma Church of Christ Cemetery.

Expressions of sympathy may be made to NAMI of Missouri.

To order memorial trees or send flowers to the family in memory of Kenneth W. Clark, please visit our flower store.