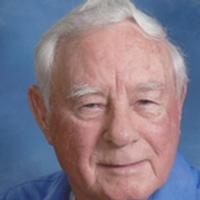 Ken was born September 23, 1932, on the family farm south of Linn, a son to the late Roy and Elva (Crider) McDaniel.

Ken attended the McDaniel school in Linn as well as the Linn grade school before graduating from Linn High School in 1950. Ken's height was 5'2" but he played both baseball and basketball while in high school excelling in both.

On September 10, 1955, Ken was united in marriage to Rosemary Bish in Linn. She survives of the home.

Ken enlisted in the US Navy on November 16, 1950 with the promise from the Navy that he could get into aviation. The Navy discovered that Ken was a very good tail turret man and that's where he was used. The Navy also taught Ken how to fly and this is what he did for the last three years of his service time not even taking leave time during those years.

After his enlistment in the Navy, Ken attended the University of Missouri studying journalism and process of printing. He worked for the Iron River Pioneer newspaper in Wisconsin and a newspaper in central Illinois before buying the Linn Observer newspaper where he was the editor and operator. He later sold the newspaper as well as the commercial printing business and worked in Montana and Modesto, CA, where he was employed by the Modesto Bee, a large daily newspaper. Changes in the newspaper and printing business led Ken to try something different so he became an American Family Insurance agent, a job he kept until his much deserved retirement.

Ken was active in politics, having served as the mayor of Belle where he brought his honesty and good business sense to the mayor's office. He started a bookkeeping system as mayor that is still in use today.

After retirement, Ken and his wife enjoyed traveling, spending winters in Texas and Arizona. He visited every state except Alaska. He also enjoyed hunting especially wild boar, quail, pheasant, turkey and deer.

In addition to his wife of 59 years, Ken is survived by: one son, Douglas McDaniel of Linn; one daughter, Marilyn Vaughn of Linn.

Expressions of sympathy may be made to the Kenneth R. McDaniel Memorial Scholarship fund.

Arrangements are under the direction of Morton Chapel, Linn, Mo (897-2214) www.mortonchapel.com

To order memorial trees or send flowers to the family in memory of Kenneth R. McDaniel, please visit our flower store.