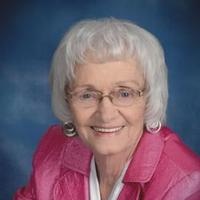 Laura Mae Wolfe, age 83 of Linn, passed away on Monday, February 27, 2017, at SSM Health St. Mary’s in Jefferson City.
Laura Mae was born on February 25, 1934, in Linn, a daughter to the late Charlie and Janet (Voss) Fincher.
Laura Mae was a 1952 graduate of Linn High School.
On October 11, 1952, she was united in marriage to Mardell Wolfe in Linn. He preceded her in death on February 25, 2007.
Laura Mae was employed at the Jean Factory in Linn and Florsheim Shoe in Jefferson City. She also made custom drapery for Marge Baclesse Interiors, sewed curtains at Osage Vans in Linn, worked at Quilts and More and Osage County Special Services.
Laura Mae was a member of St. George Catholic Church and St. Ann’s Sodality.
She enjoyed Sudoku, camping, sewing, quilting and watching St. Louis Cardinal Baseball and the Alabama Crimson Tide. She especially enjoyed the time spent with her family.
Laura Mae is survived by: two daughters, Kelly (Darryl) Wiles of Vienna, and Stacy (Ed) Thoenen of Linn; one sister, Linda (Steve) Inglish of Jefferson City; ten grandchildren, Chris, Zebari “Zeb”, Josie, Boone, Chelsea, Alyssa, Shelby, Nikki, Garet and Brittany; 13 great grandchildren with one on the way and several nieces and nephews.
In addition to her parents and spouse of 54 years, Laura Mae was preceded in death by: a daughter, Trina McCann and three infant daughters; and a brother, Donald Fincher.
Visitation will be held from 4:00 p.m. to 7:00 p.m. on Wednesday, March 1, 2017, at Morton Chapel in Linn.
Mass of Christian Burial will be held at 11:00 a.m. on Thursday, March 2, 2017, at St. George Catholic Church in Linn with Fr. Daniel Merz and Fr. I.C. Medina as concelebrants.

Interment will be in the Linn Public Cemetery.
Expressions of sympathy may be made to Osage County Special Services.

with FR. Daniel Merz and Fr. I.C. Medina as concelebrants.

with FR. Daniel Merz and Fr. I.C. Medina as concelebrants.

To order memorial trees or send flowers to the family in memory of Laura Mae Wolfe, please visit our flower store.