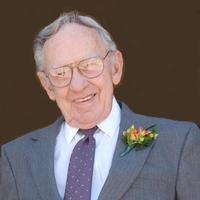 Lawrence was born December 26, 1927, in Rich Fountain, a son to the late Martin and Margaret Mary (Grellner) Rudroff.

Lawrence served in the United States Navy. While being stationed aboard the USS Jason in San Diego, CA., he witnessed the only flight of the Spruce Goose Hughes H4 Hercules.

On April 13, 1948, he was united in marriage to Gladys Edwards at Sacred Heart Catholic Church in Rich Fountain. She preceded him in death on June 12, 2014.

Lawrence was a lifelong farmer with a passion for caring for cattle. He was also a business man who owned and operated Quality Dairy in Jefferson City and later was the owner/operator of Rudroff Bus Company in Linn.

Lawrence was a lifelong member of Sacred Heart Catholic Church, Rich Fountain Knights of Columbus where he served as a past Grand Knight and was a 4th Degree Member of Assembly #2811, American Legion Post #317 in Freeburg, the Vitae Society and Flight of Eagles Club in Jefferson City.

Lawrence enjoyed traveling with Gladys, playing golf, bowling, hunting, flying his own plane, singing, playing the violin and learning about his German heritage from his relatives in Germany.

Lawrence is survived by: his five children, Ronald Rudroff and wife Kathleen of Jefferson City, Karen Hunter Krueger and husband Mark of Kennett, Terry Rudroff and wife Ruth Ann of Linn, Nancy Nycum of Edwards, MO., and Marla Travis and husband Keith of O’Fallon; two brothers, Linus Rudroff of Rich Fountain and Norbert Rudroff and wife Carol of Rich Fountain; one sister, Anna Louise Castrop of Jefferson City; eighteen grandchildren and 35 great grandchildren with one due in January, and numerous nieces, nephews and friends.

In addition to his parents and his spouse of 66 years, he was preceded in death by: two brothers, Martin and Francis Rudroff and two sons-in-law, Terrence Hunter and Charles Nycum.

Mass of Christian Burial will be held at 11:00 a.m. on Tuesday, December 27, 2016, at Sacred Heart Catholic Church in Rich Fountain with Fr. William Debo as the celebrant. Interment will follow in Sacred Heart Parish Cemetery with full Military Honors.

Expressions of sympathy may be made to Sacred Heart Catholic School in Rich Fountain or the Vitae Caring Foundation.

To order memorial trees or send flowers to the family in memory of Lawrence S. Rudroff, please visit our flower store.