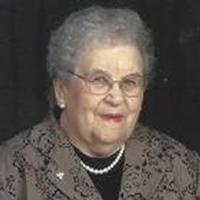 Leona was born July 15, 1924, in Linn, a daughter to the late Theodore and Katherine (Adelhardt) Linnenbrink.

Leona was employed for over 20 years at St. George Catholic School.

She enjoyed quilting, cooking, word search, watching Wheel of Fortune, and especially bingo and breakfast with the "breakfast club".

Leona is survived by: one son, Michael Jaegers and his wife, Karen of Jefferson City; one daughter, Jean Carpenter and her husband, Dan of Taos; two sisters, Marcie Dudenhoeffer of Linn and Margie VanLoo and her husband, Paul of Wardsville; four grandchildren, five great grandsons, one great granddaughter and several nieces and nephews.

In addition to her husband and parents, Leona was preceded in death by two brothers, Norbert and Wilbert Linnenbrink and two sisters, Lillian and Loraine Linnenbrink.

Mass of Christian Burial will be held at 10:00 a.m. on Saturday, March 16, 2013, at St. George Catholic Church in Linn with Fr. John Schmitz as the celebrant and Deacon Anthony Valdes. Interment will follow in the St. George Parish Cemetery.

To order memorial trees or send flowers to the family in memory of Leona G. Jaegers, please visit our flower store.