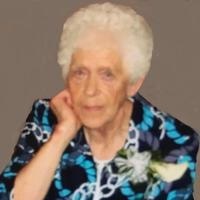 Lillian was born on February 11, 1935, in Linn, a daughter to the late Reed and Mildred (Evans) Monroe.

Lillian was a graduate of Linn High School.

Lillian was the Manager at Public Water District #4 in Taos until her retirement in 2002. She was affectionately known as the “Water Lady”.

Lillian volunteered at the Samaritan Center in Jefferson City and was also a Partner volunteer with Capital Region Medical Center. She was a member of the United Methodist Church and the Eagles Ladies Auxiliary # 2693 in Jefferson City where she was on the Ritual Team.

Lillian was a big NASCAR and St. Louis Cardinal fan. She enjoyed living on the Moreau River and spending time with her family.

Visitation will be held from 12:00 p.m. to 2:00 p.m. on Thursday, February 2, 2017, at Morton Chapel in Linn. Funeral Services will follow at 2:00 p.m. with Chaplain Bart Larson officiating. Interment will be in the Linn Public Cemetery.

To order memorial trees or send flowers to the family in memory of Lillian R Gove, please visit our flower store.