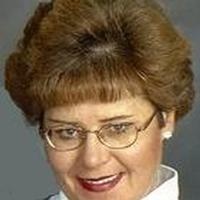 Linda M. Hasenbeck, age 50 of rural Chamois, passed away peacefully after a long illness on Friday, March 11, 2011, at her residence in the presence of her loving husband.

Linda was born on July 15, 1960, in Marquette, MI a daughter to the late James and Barbara (Thomas) Dunne.

She was a 1979 graduate of Olathe North High School in Olathe, KS. After high school, Linda went to work for King Radio Corporation as a Production Control Clerk. It was at King Radio where she met her future husband, Mike.

She was united in marriage to Michael L. Hasenbeck on May 1, 1987, in Olathe.
He survives of the home.

Linda was a member of St. George Catholic Church and enjoyed crafts and crocheting.

In addition to her husband, Linda is survived by: one brother, James and his wife Jackie Dunne of Paola, KS; one sister, Sandy Brown and her husband Tim also of Paola; a father-in-law, Gerald Hasenbeck of Jefferson City; a brother-in-law, David and his wife Cibele Hasenbeck of Piedmont; a loving aunt to five nieces and five nephews. She is also survived by her special friend Rusty, her Labrador retriever.

In addition to her parents, she was preceded in death by her mother-in-law, Judith Ann Hasenbeck.

To order memorial trees or send flowers to the family in memory of Linda M. Hasenbeck, please visit our flower store.