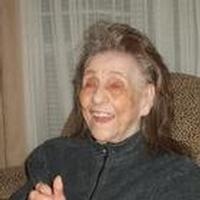 Lorene F. Eads, age 84 of Linn Creek and formerly of Linn passed away Saturday, December 17, 2011 at her residence.

Lorene was born January 6, 1927 in Chamois, a daughter to the late Edward and Effie (Starr) Walker.

Lorene was a member of the Southridge Baptist Church in Jefferson City. She loved to sing, play the guitar and cook. Her blindness was never a handicap to her. She was very independent.

Lorene is survived by: one son, Dennis Bess of Holts Summit, one step-son, Roger Bess of Blanchard, IA.; two daughters, Dee Wood of Eldon and Penny Lower and her husband Michael of Linn Creek; 19 grandchildren and 31 great grandchildren.

In addition to her parents and husbands, Lorene was preceded in death by one son, Danny Bess, one step-son, Douglas Bess, one brother, Lewis Edward Walker and 3 step-grandchildren.

To order memorial trees or send flowers to the family in memory of Lorene F. Eads, please visit our flower store.