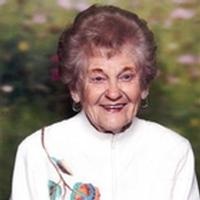 Lorene was born January 12, 1921, in Bonnots Mill, a daughter to the late Fred E. and Amelia (Leivian) Hartman.

On July 4, 1942, Lorene was united in marriage to Arthur "Bud" Verdot at St George Catholic Church in Linn. He preceded her in death on November 28, 1983.

During World War II, Lorene worked as the Chief Clerk for the Price and Ration Board in Linn. She later worked as the office manager and payroll clerk for Linn Manufacturing for 20 years before taking a job as an administrative assistant with the Department of Revenue from where she retired in 1987.

Lorene was a member of St. George Catholic Church in Linn, St. Ann's Sodality, the Osage County Historical Society and a Retired Missouri State Employee. She also volunteered at the Good Shepherd Food Pantry in Linn for a number of years.

with Fr. Daniel Merz as the Celebrant.

with Fr. Daniel Merz as the Celebrant.

To order memorial trees or send flowers to the family in memory of Lorene S. Verdot, please visit our flower store.
Send a Sympathy Card