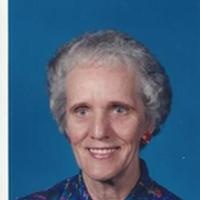 Loretta was born December 3, 1925, in Linn, a daughter to the late Rainhart "Rainey" and Gertrude (Vossen) Schaefer.

Loretta was a 1944 graduate of Linn High School.

In addition to being a homemaker, Loretta worked as a bookkeeper at a bank.

Loretta was a member of St. Stanislaus Catholic Church in Wardsville and the Red Hatters Club.

She enjoyed watching soap operas, collecting rock babies, and had worked as a volunteer at St. Mary's Hospital as well as a volunteer "Class Grandma" at Immaculate Conception School in Loose Creek.

In addition to her parents and spouse of 21 years, Loretta was preceded in death by: one son, James Coffman, III; one daughter, Barbara Heriford; three brothers, Bill, Joe and Herbert Schaefer; one sister, Leona Bret and an infant sister.

Mass of Christian Burial will be held at 10:00 a.m. on Friday, August 14, 2015, at St. George Catholic Church in Linn with Fr. I.C. Medina as the Celebrant. Interment will be in the Steelville Cemetery in Steelville.

To order memorial trees or send flowers to the family in memory of Loretta Catherine Coffman, please visit our flower store.