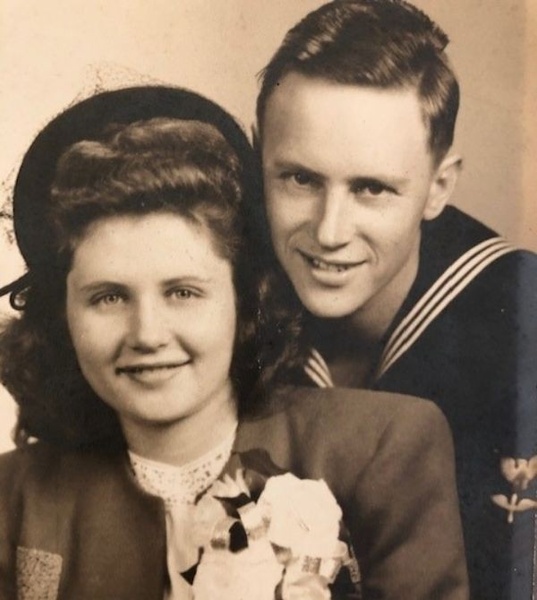 Loretta was born on November 3, 1925, in Morrison, the daughter to the late Oscar Lambert and Leona Theresa (Oncken) Frey.

Loretta was a 1943 graduate of Herman High School.

Clarence was a career Navy man, so they moved many times.  Settled in Jacksonville, Florida   Loretta worked as a secretary and LPN.  They moved back to Morrison in 1978.  They were members of Zion St. Peters Evangelical Church in Pershing where she was a of the Women’s Fellowship and Fellowship Crusaders.

Loretta and Clarence enjoyed traveling in their camper. Travels included trips to Alaska, Nova Scotia, West and East Coast.  Clarence and Loretta were married 69 years and enjoyed their home and lake in their retirement, while sitting on their porch appreciating their view.

Loretta and Clarence were the proud parents of two boys, Danny Joe and Ron. Loretta was preceded in death by one son, Senior Chief Danny Joe Lalk.

Loretta’s son Ron was a Captain with United Airlines.  Together they made many trips to Europe, England, Paris, Holland, Sicily, Hawaii, and Italy.  Three of her highlights of her trips was Christmas at the Vatican, a visit to the home of Monet, and viewing the Mona Lisa in Paris.

In lieu of flowers, expressions of sympathy may be made to Zion St. Peters Evangelical Church in Pershing.

To order memorial trees or send flowers to the family in memory of Loretta Margaret Lalk, please visit our flower store.