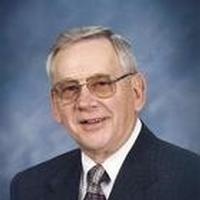 Louis "Louie" U. Bonnot, age 80, of Jefferson City, formerly of Linn, passed away Thursday, June 9, 2011, at his residence in Jefferson City.

He was united in marriage on April 21, 1956, in Bonnots Mill to Emma Schmid who survives of the home.

Louie was a graduate of Linn High School and served in the United State Air Force from 1948 to 1952. He then worked as a tow boat engineer for three years.

Louie was an avid fan of the St. Louis Cardinals, even hitchhiking to the 1946 World Series as a teenager. He also enjoyed traveling, including annual family vacations across the country and visiting Rome, Italy where he shook the hand of Pope John Paul II. Louis was a devoted husband, father, grandfather, and great grandfather who knew no strangers and had a wonderful sense of humor that will be sorely missed by all who knew him.

Mass of Christian Burial will be at 1:00 p.m. on Sunday, June 12, 2011, at St. George Church in Linn with Fr. I.C. Medina as the Celebrant. Interment will follow at St. George Cemetery.

To order memorial trees or send flowers to the family in memory of Louis U. Bonnot, please visit our flower store.